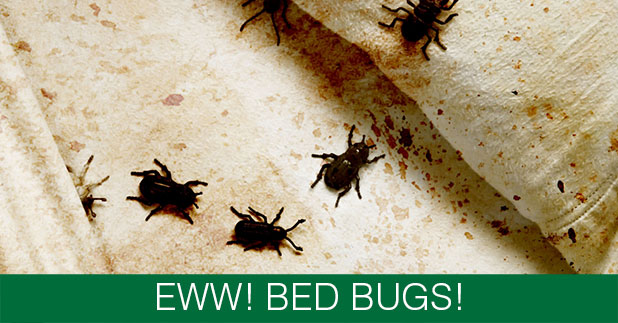 Baltimore has a reputation for plenty of things, some of them great, like amazing football and baseball teams and Natty Boh, and some of the things are not great. Among these is bed bugs. Earlier this year, a well-known national pest control company listed good old Charm City as the number one town for bed bugs. And while we all wish we’d be number one for lots of other things instead, the fact is that bed bugs are here and if you want to “get them gone”, you need professional help in the form of a pest control company that knows how to treat them. In case you don’t know enough about bed bugs to make the decision to get professional help, we’ll dedicate this week’s post to bed bug basics. When you are ready to cry uncle and get help, call Armor Pest Control.

Alas, they are real. For a long time they were not a problem and so the bedtime send off, “Good night, sleep tight, don’t let the bed bugs bite” was just a saying. In fact, around the 1940s, bed bugs were pretty much eradicated from the developed world, according to Wikipedia. But, as a result of pesticide resistance, they have been making a comeback, likely having arrived back in the country via the suitcases of travelers. So, they are indeed all too real.

Bed bugs are parasitic insects that have been around humans since we were living in caves and were mentioned in early Greek texts, and it seems they will be with us for quite a while into the future. These bugs are just 2.5 millimeters when they are nymphs and grow to 4.5 millimeters—that’s about the size of an apple seed.

I don’t see them on my bed, where are they?

Bed bugs are mostly active at night, though not strictly nocturnal. They spend the day hiding in cracks and crevices near where humans sleep.  They can be found in the seams of the mattress, corners of drawers in night stands, electric outlets, and picture frames.  It can be quite hard to catch them moving around since they are well practiced at hiding from humans. It is often easier to conclude that they are there by looking for their waste and/or blood streaks on the sheet or pillow case from them biting you.

You can often tell that you have bed bugs by the bites they inflict on you. Instead of random bites, for example, one on your calf and one on your arm, bed bugs will bite in a row or in clusters. They often bite people on the upper body, back, arms, and shoulders.

I Think I Have Bed Bugs

Lots of people have bed bugs these days and there is no shame in it. You can get them anywhere, from a vacation to the gym. It’s not your fault and there is something you can do about it. Since they made their come back as a result of resistance to pesticides, other means need to be used to treat them. Heat treatment is often the best way to get rid of them for good, but only after the scale of the infestation is seen by a pest control professional.

Call Armor Pest control for an inspection and send those bugs to their final good night!