Many people think of bed bugs as no more than  a cute bedtime cliché: “Sleep tight. Don’t let the bed bugs bite!” But they are quite real, and far from cute.

Bed bugs are small, brownish insects with flat, oval-shaped bodies. Young bed bugs can be no bigger than a pinhead, or even undetectable by the naked eye. They feed on the blood of animals, including humans. Their name comes from their tendency to live between mattresses and feed on bed occupants at night. Bed bugs don’t fly, but move quickly over floors, walls, and ceilings. Female bed bugs lay up to five eggs a day and 500 during a lifetime.

…And They’re A Real Problem!

Bed bugs are believed to have originally traveled to the United States from Europe in the 17th-century. Efforts to control them after World War II dramatically reduced the occurrence of U.S. infestations. But recently, as you may have heard in the news, bed bugs have made a huge comeback. Five or six years ago, pest control companies reported one or two bed bug calls a year. Now, they’re reporting one or two a week. And the National Pest Management Association’s member pest control companies have reported 50 times more bed bug calls than usual in the past few years.

Can Bed Bugs Invade My Establishment?

The short answer is yes. Bed bugs are increasingly showing up in homes, apartments, hotels, dormitories, shelters, and vehicles throughout the U.S. They hitch rides in luggage, boxes, shoes, and other mobile objects. Infestations are not tied to unsanitary living areas. World-class hotels have reported bed bug problems.

Since they only come out at night, you may have no idea that they’re present.

Bed bugs are flat, wingless, oval-shaped, and lentil-sized (although young bed bugs can be too small for the naked eye to spot). They are often mistaken for ticks or small cockroaches.

What Are The Signs of Bed Bugs?

Typically, the first sign of a bed bug infestation is the appearance of small brownish or reddish dots on bed linens and mattresses. These are bed bug droppings and blood spots. Eggs and molted skins may also be visible. Heavy infestations may result in an odor described as “buggy” or sweetish smelling. Bed bug “bites” (actually entry points of their blood-drawing beaks) often result in red, itchy welts, which appear as red dots with a lighter red ring around them. Bed bugs feed on any bare skin exposed while sleeping, such as the face, neck, shoulders, arms, hands, etc.

Where Do Bed Bugs Hide? 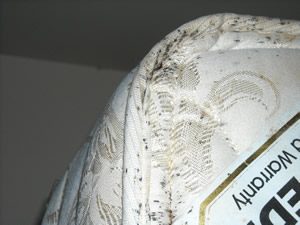 Bed bugs are able to crawl into very small crevices in and around human environments. They do not have nests like ants or bees, but they do tend to congregate in habitual hiding places. These hiding places include:

How Do I Get Rid Of Bed Bugs? 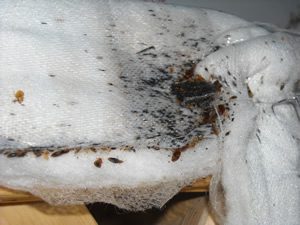 Bed bugs are extremely difficult to eliminate, and do-it-yourself measures won’t work at all. Your first step should be to contact Armor Pest Control. Our trained professionals will locate the bed bugs, apply the right treatment to infested areas, and usually return for a follow-up inspection. Future inspections and treatments may be necessary. Call today for a free consultation!